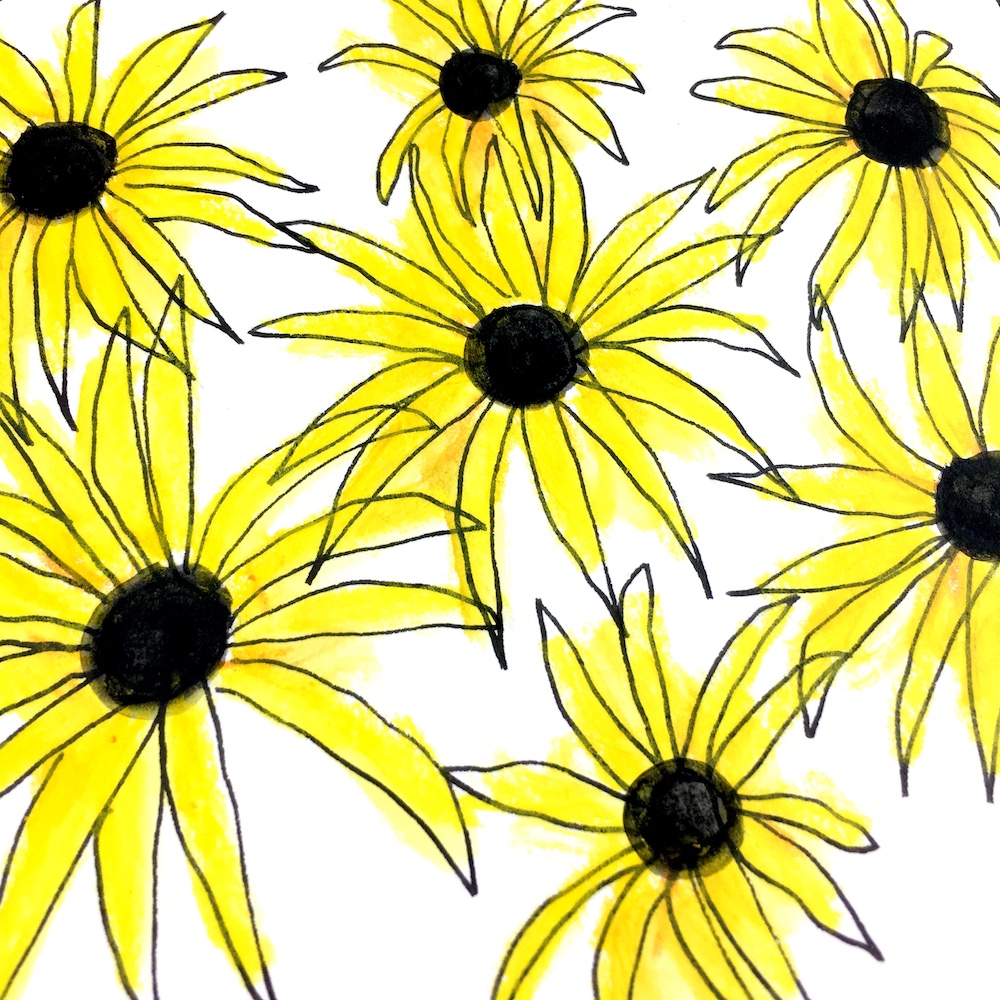 This month my nature journal, for the most part, moved away from flowers into the realm of trees. This included some species from my time on yoga retreat in the South of France. Thanks to the PlantSnap app, I was able to identify them: Japanese Maple, European Smoketree, and Spanish Chestnut. This was my sixth year at the retreat and the first time I ever looked so closely at the trees surrounding us during our time there. 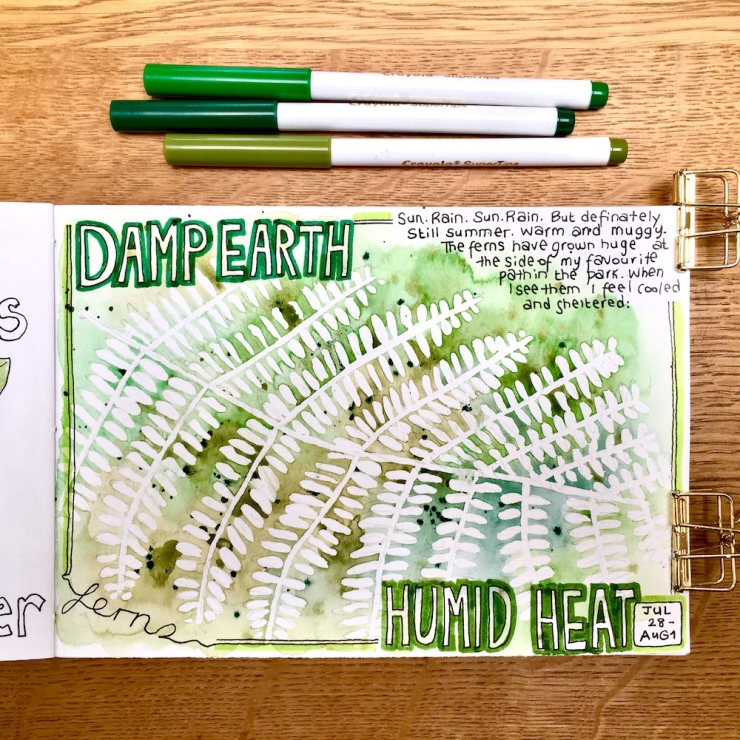 Sun. Rain. Sun. Rain. But definitely still summer. Warm and muggy. The ferns have grown huge at the side of my favourite path in the park. When I see them, I feel cooled and sheltered.

On a technical note: this is the first time I’ve ever used masking fluid! I bought some months ago and then forgot I had it. Wow! It’s like magic! 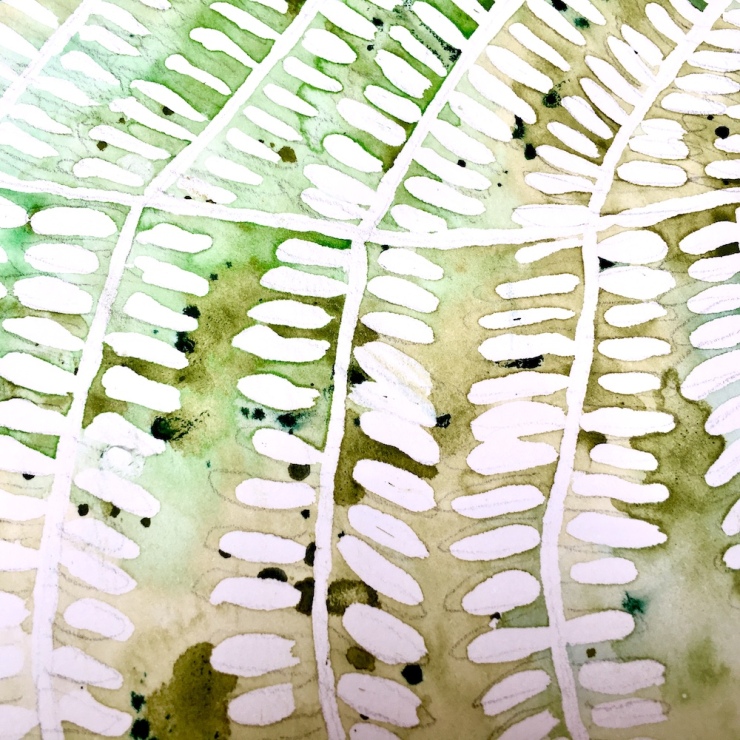 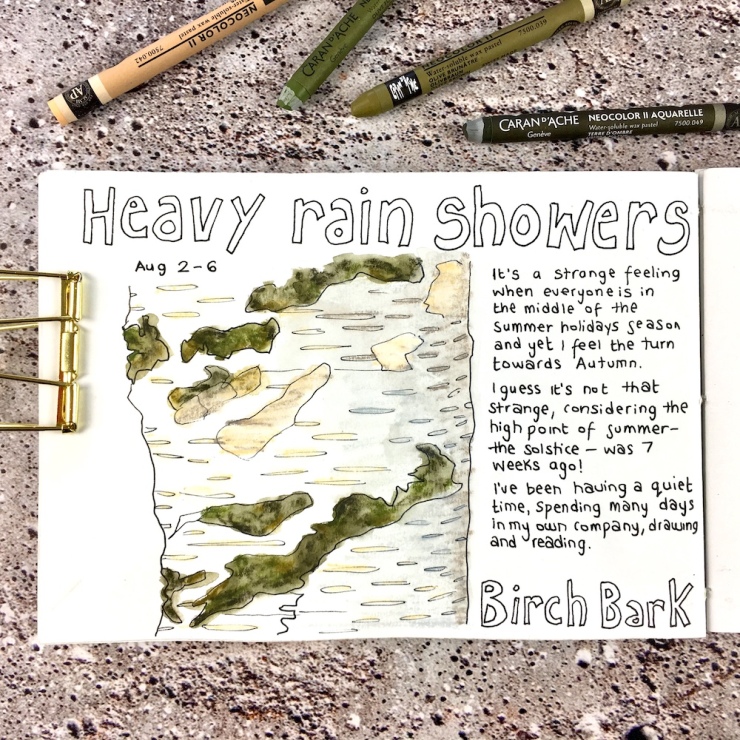 It’s a strange feeling when everyone is in the middle of the summer holiday season and yet I feel the turn towards autumn. I guess it’s not that strange, considering the high point of summer – the solstice – was seven weeks ago! I’ve been having a quiet time, spending many days in my own company, drawing and reading.

Ps. It is now the halfway point of the ancient Japanese micro-season calendar! 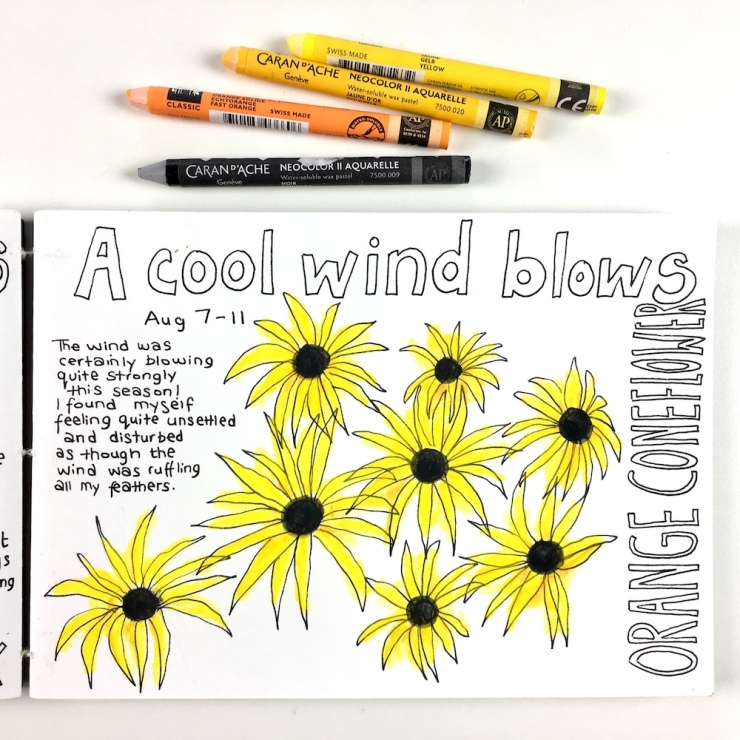 The wind was certainly blowing quite strongly this season! I found myself feeling quite unsettled and disturbed, as though the wind was ruffling all my feathers. 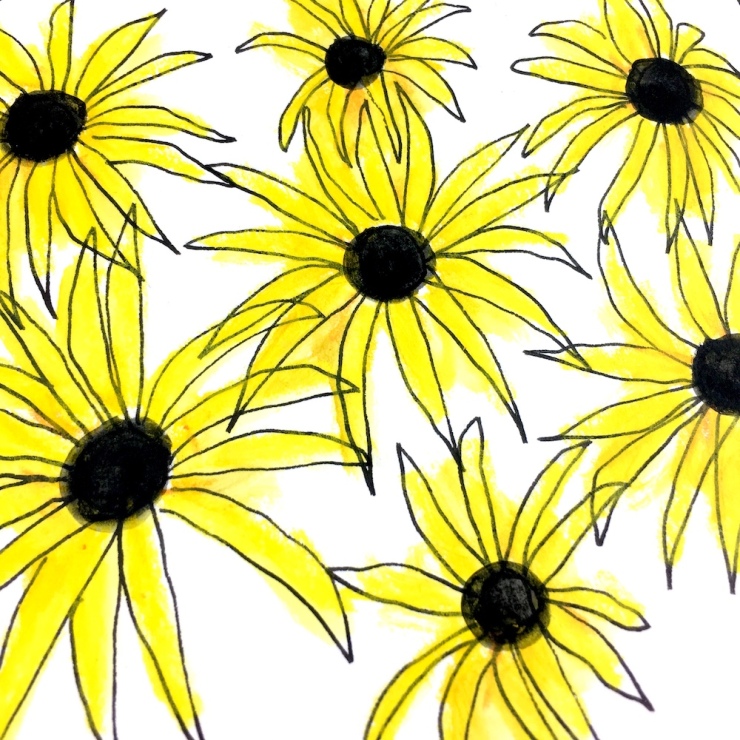 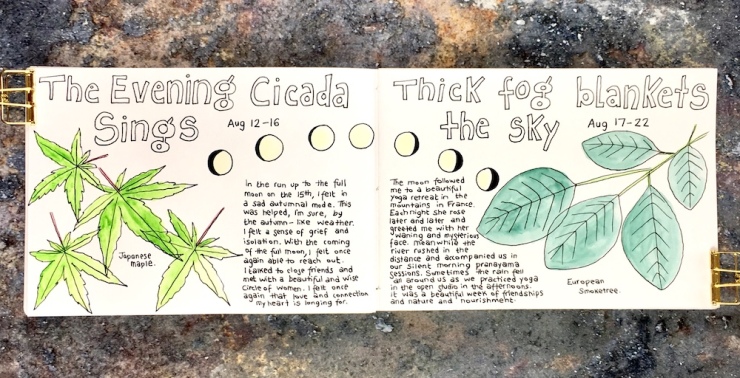 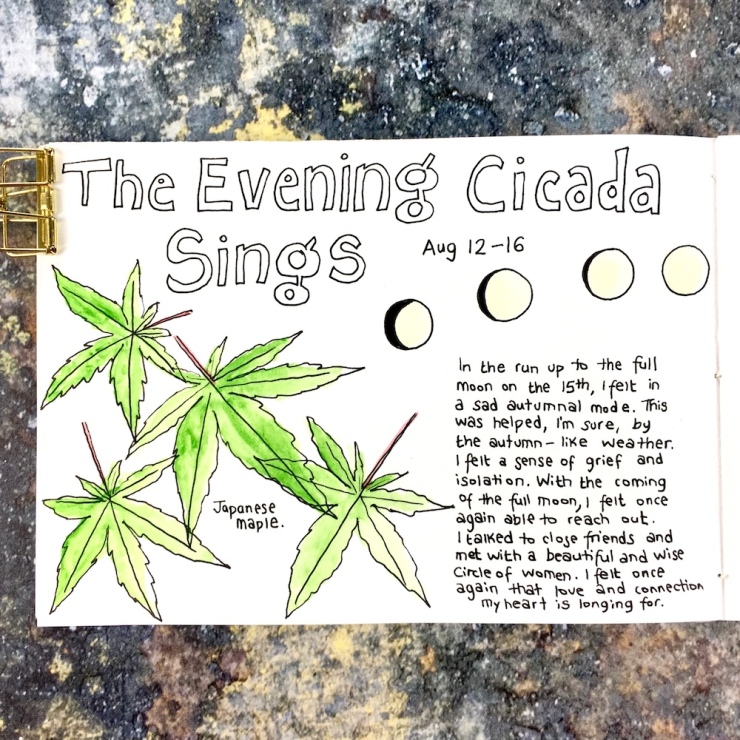 In the run up to the full moon on the 15th, I felt in a sad autumnal mode. This was helped, I’m sure, by the autumn-like weather. I felt a sense of grief and isolation. With the coming of the full moon, I felt once again able to reach out. I talked to close friends and met with a beautiful and wise circle of women. I felt once again that love and connection my heart is longing for. 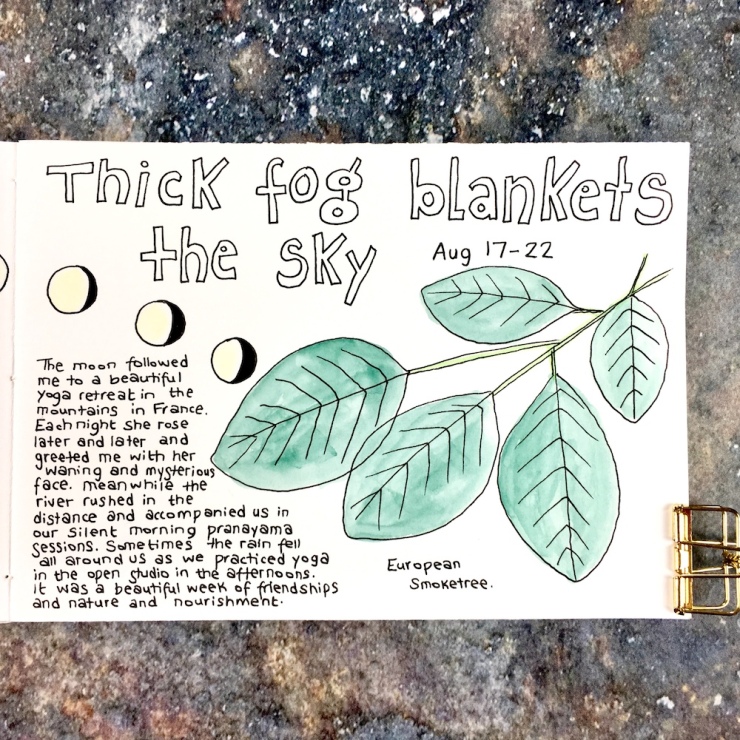 The moon followed me to a beautiful yoga retreat in the mountains in France. Each night she rose later and later and greeted me with her waning and mysterious face. Meanwhile, the river rushed in the distance and accompanied us in our silent morning pranayama sessions. Sometimes the rain fell all around us as we practiced yoga in the open studio in the afternoons. It was a beautiful week of friendships and nature and nourishment. 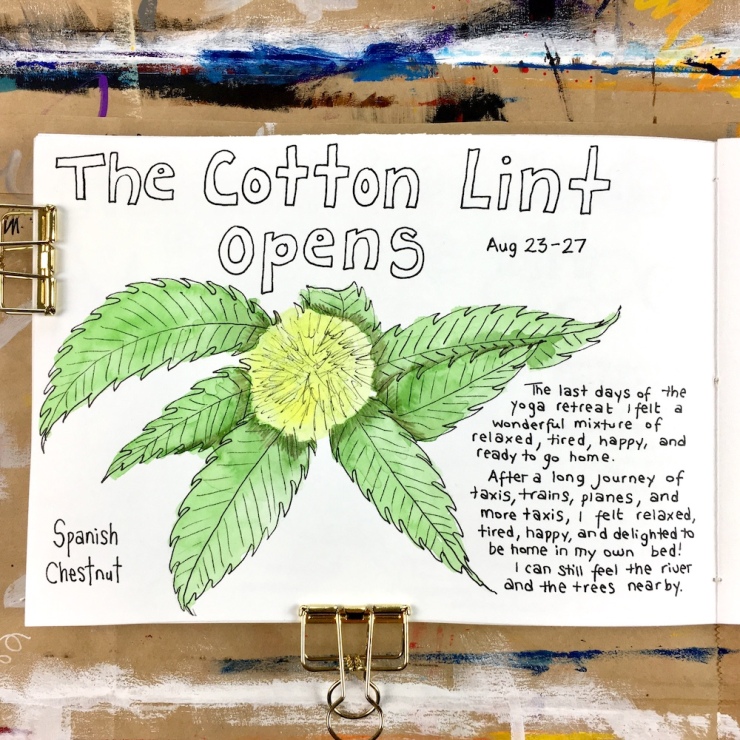 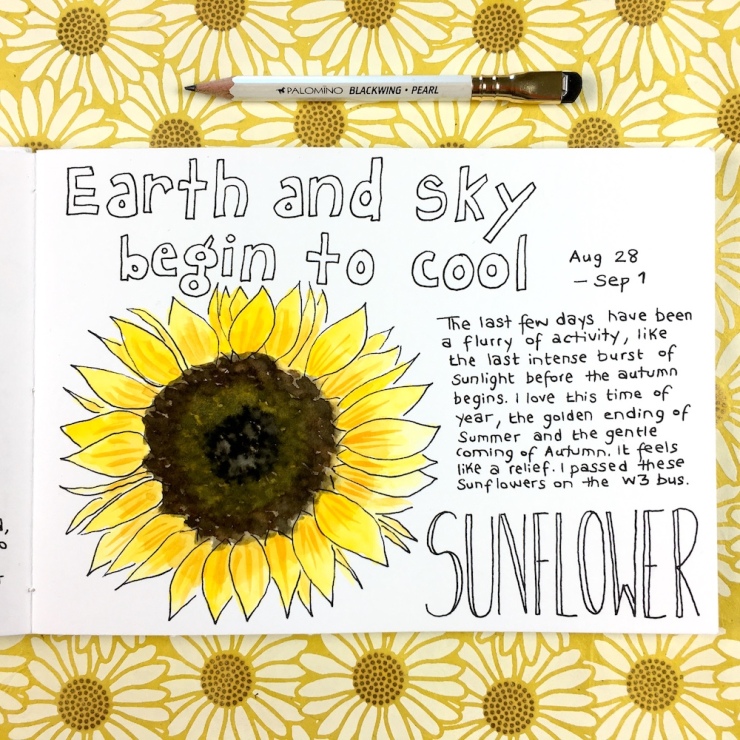 The last few days have been a flurry of activity, like the last intense burst of sunlight before the autumn begins. I love this time of year, the golden ending of summer and the gentle coming of autumn. It feels like a relief. I passed these sunflowers while on the W3 bus. 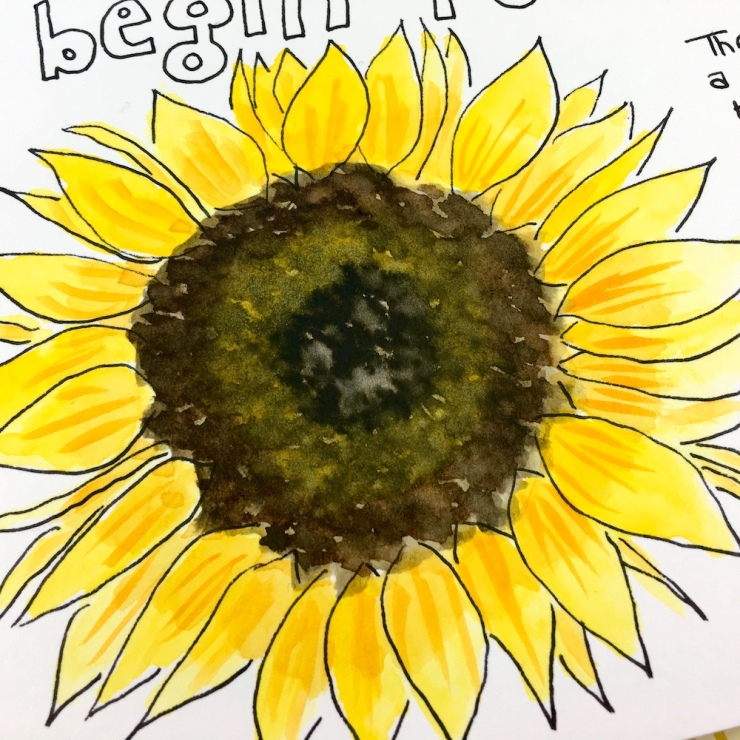